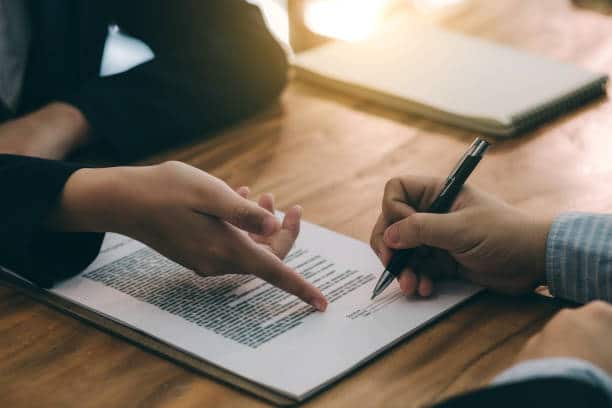 Lately, you and your spouse haven’t been getting along. You’ve been fighting a lot, and you aren’t speaking, which has you worried that this might be the end of your relationship.

Well, maybe it is. Then again, maybe you just need a break.

If you aren’t sure about divorce—but need time and space to figure things out—then a legal separation might be right for you.

Here’s what you need to know about legal separation in Tennessee, and how the Byrd law team can help with yours.

Legal Separation: It’s Not the Same Thing as Divorce

The first thing to know about legal separation, is that while they both share many of the same functions, it is not the same thing as divorce.

In legal speak, “divorce” is the formal process of breaking a marriage contract—and we aren’t just talking about a simple fracture, here, either.

Divorce permanently dissolves any obligation or connection between spouses, completely severing your joint life into two, separate halves. (Which, now that we think about it, makes divorce a lot more like amputation than a break, but we digress…)

Unlike your college breakups, divorce can’t be done on your own. Instead, you and your spouse will need to involve the court on some level or another. After all, this isn’t a simple parting of the ways. It’s the breaking of a contract, and you’ll need help settling important issues such as dividing marital property, assigning alimony, and determining child custody.

From uncontested divorce, to mediation, all the way up to litigation, there are a lot of different ways to settle these issues. However, no matter which type of divorce you choose, each has the same outcome:

Once finalized, you will no longer be a joint entity in the eyes of the law. Instead, you and your spouse will be separate individuals, without any of marriage’s accompanying rights or benefits. 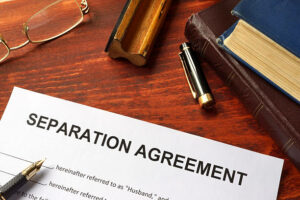 Now on to legal separation.

Essentially, legal separation is just a fancy version of your regular, run-of-the-mill marriage time out. The kind of separation you hear about all the time, whenever one of your married couple friends decide to live apart for a while. The difference, here, is: your separation agreement.

Rather than flying by the seat of your pants and hoping things will run smoothly (the way you do in a casual separation), in a legal separation, the court dictates the terms of your split in what’s known as a “marital separation agreement.”

This agreement covers many of the same topic areas as a divorce order. For example, it can be used to outline things like:

If it helps, think of a separation agreement like your own personal Rules of Engagement; the cans and cannots of what’s okay while you’re apart.

However, unlike a divorce order (which, remember, is permanent), a legal separation agreement can easily be revoked, if you ever decide to reconcile down the road.

Why Choose Legal Separation Over Divorce?

There are a lot of reasons why spouses might want to separate, rather than divorce. Just like every relationship is different, though, the motivations driving this decision will be different, for everyone, too.

For some couples, it’s religiously motivated; a way for spouses to live apart, but remain within the bounds of a belief structure that doesn’t allow for divorce. In other cases, partners want to maintain health or insurance benefits. Others, still, simply need time and space to figure out what they really want, and some are motivated by wanting to keep their family together—usually for the sake of young children.

In short, the decision comes down to the opinions, beliefs, and needs of the couple making the decision, along with which benefits they’re looking to take advantage of.

The Benefits of Legal Separation

As we’ve already discussed, legal separation is not permanent. Rather, it’s a place of limbo, hovering in the space between marriage and divorce, where it draws benefits from each end of the spectrum. These benefits encourage couples to stay married until they’re absolutely sure, and promise certain protections in return.

That last one is pretty useful, since it’s one of only two ways couples can file for a “no-fault” divorce in Tennessee. However, you can only take advantage of this option if you don’t have children, and you can prove you were actually living in separate residences for the duration of that time. Legal separation can be a great way to satisfy this proof, while also helping you avoid the toxic environment of a fault-based divorce.

The only other way to obtain a “no-fault” divorce in Tennessee is for couples to agree on all the terms of their split in a settlement, prior to coming to court. Otherwise, couples must file for divorce under “fault-based” grounds.

The Limitations of Legal Separation

While legal separation has a lot of benefits, this relationship status is not without its drawbacks—most of which stem from the simple fact that you’re still married.

This means that if you want to remarry, you’ll have to go through the full hullaballoo of getting a formal divorce, which will end up costing you more money and time back in court.

If partners agree, it’s (technically) possible for the court to turn a separation agreement into a final divorce order. However, there are usually at least a few things partners want to revisit before calling it quits, and even if there aren’t, you will still need to petition the court, in order to have everything finalized.

Bottom line? In this arena, time equals money, and if you want to turn your legal separation into a formal divorce, this time will definitely cost you.

Also, consider this: Tennessee is one of the few remaining states that allows for fault-based divorces. This means that romantic partners are off limits during your separation. If you choose to date someone, anyway, you run the risk of being slapped with an infidelity charge, later on down the line—a claim that can significantly impact your share of marital property, during a divorce.

Because of these drawbacks, it’s sometimes better to simply get a divorce the first time around, rather than hassle with the issues that can sometimes arise with legal separation.

How to Get a Legal Separation? 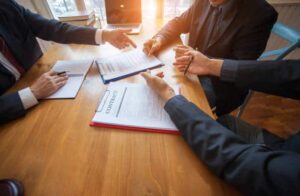 If the benefits outweigh the cons, you can make your legal separation official by drafting a marital separation agreement with your spouse.

Similar to a prenuptial or postnuptial agreement, a separation agreement is a contract between romantic partners that formally outlines your individual duties and responsibilities, while separated. This contract can make you as financially independent or dependent from one another as you want, and will usually include specific instructions on how property will be handled during your break.

If you have minor children, your agreement should also include a parenting plan, which specifically addresses things like custody, child support, and visitation. If necessary, you can even draft your separation agreement to include alimony (or “spousal maintenance”).

Once your terms have been compiled, you will need to file a petition with the court, asking them to ratify your legal separation (and it’s accompanying agreement).

Tennessee family law does not require you to have an attorney for this process. However, even though this legal separation isn’t as binding or permanent as divorce, it still deals with a lot of important rights, and having an attorney present will give you the peace of mind in knowing your best interests are being fully represented at all times.

Divorce has permanent, far-reaching effects, and isn’t something you should do unless absolutely sure. However, that doesn’t mean you can’t take a time-out from your spouse, in order to figure out what you really want.

If you have more questions about legal separation in Tennessee, and how this arrangement might look in your situation, we want to hear from you. Call the Byrd Law team at (423) 304-6827, or contact us online, and together, we can figure out if legal separation is right for you.