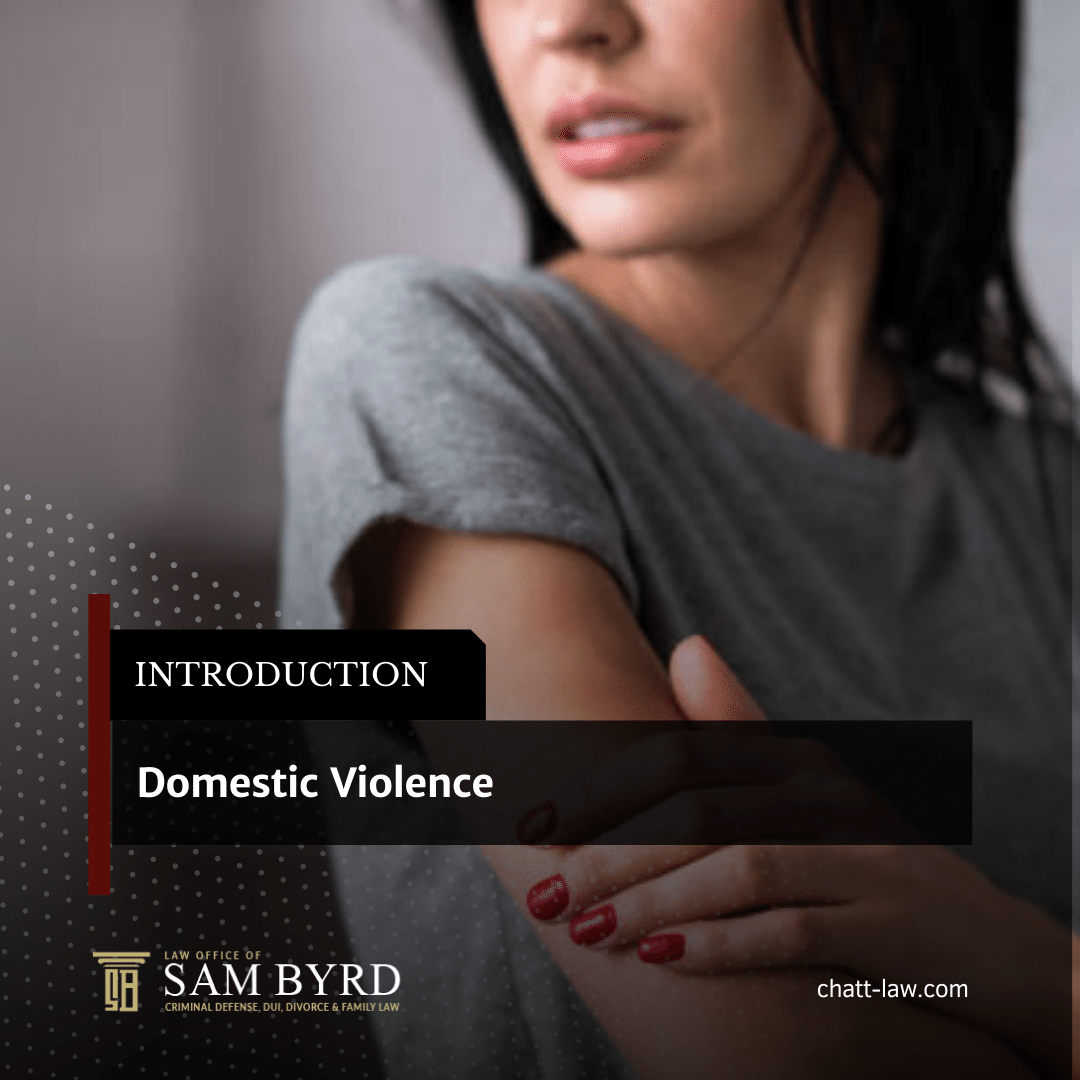 Domestic violence is not something Tennessee courts take lightly. If you or a loved one is experiencing harm at the hand of a loved one, nothing is more important than keeping yourself—and your children—safe.

To help you safely pursue these options, there are a number of different domestic violence organizations that can help you know where to start. Some of these include:

On these sites, you will find more information about domestic violence, help hotlines, shelter locations, assistance with finding affordable legal representation, and much more.

In this article, we’ll give a brief intro to domestic violence, how it impacts divorce in Tennessee, and what the Byrd Law team can do to help, as you navigate these serious issues.

First off, what is domestic violence?

Most people assume it involves spousal harm that occurs within the walls of a couple’s own home (as its name implies). And, while this is true, the legal definition of domestic violence actually covers a lot more than just fistfights in the family kitchen.

Here’s a closer look at the who and the what of domestic violence in Tennessee.

Who is involved in domestic violence?

According to Tennessee law, abuse rises to the level of “domestic violence” when it is committed by someone who is a:

As you can see, you do not have to be married to the abuser in order to qualify—you don’t even have to be in a romantic relationship. Domestic violence can be committed by a parent, sibling, extended family member, or even just someone you once went on a date with.

What does domestic violence involve?

As with the who, the what of domestic violence is also often underrepresented and includes much more than people generally assume.

For purposes of domestic violence, “harm” extends much further than just physically hurting someone. In Tennessee, this type of abuse includes:

In addition, threats of harm don’t have to be carried out against you, personally. An offender who is trying to control their victim by threatening to hurt a loved one is also guilty of domestic violence.

Domestic Violence and Divorce in Tennessee

Domestic violence can have a significant impact on divorce, no matter which state you live in. However, this impact is arguably even greater in Tennessee, since it is one of only a few jurisdictions that allows for fault-based divorce.

Unlike a no-fault divorce, fault-based divorces allow judges to assign blame, and hold one spouse financially accountable for their role in the marital breakup. Adultery is one of the most common fault-based divorce grounds in Tennessee. Others include drug and alcohol abuse, conviction of a crime, and cruel or inhumane treatment—including domestic violence.

If upheld, this type of abuse can have a significant impact on how certain areas of your divorce are decided. In particular, the division of marital property, child custody decisions, and even alimony. Here’s why.

One of the biggest ways a fault can impact divorce, is in the division of marital property.

Like many jurisdictions, Tennessee is an equitable distribution state. This means that when a couple gets divorced, judges attempt to divide jointly owned marital property according to what is most fair (or “equitable”)—not necessarily what’s exactly fifty-fifty.

Unlike in a community property state, equitable distribution allows intrinsic, non-financial elements to come into play. And, in Tennessee, this includes fault, such as domestic violence.

If upheld, these charges can significantly reduce the amount of marital property that an abusive spouse receives in their divorce. (Though, the actual extent of this disparity will depend on the severity of the abuse, and other individual case factors).

This is why—even though fault divorces can be more stressful and emotionally toxic—domestic violence victims may still want to consider filing for a fault-based divorce. 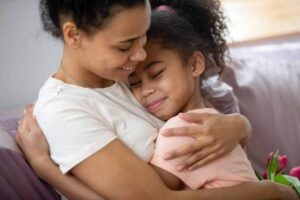 Child custody is another area that can be significantly impacted by claims of domestic violence.

In Tennessee, all decisions involving minor children are analyzed under the scrutinizing lens of the best interest of the child. This legal standard weighs the factors of a case against each of its potential outcomes, and chooses the scenario that will ultimately serve a child’s long-term health and well-being the best.

Since the parent/child relationship is so important, judges generally try to award joint custody whenever possible, and are loath to strip away parental rights altogether.

That being said, a child who is being subjected to domestic violence at home—whether personally, or simply by being in the same proximity as the abuse—is arguably under some pretty significant duress. Hence, in some situations, the only way to prevent future harm is to reduce that parent’s access to their child, altogether.

While the outcome will ultimately depend on the specifics of your situation, judges usually try to leave at least some access in place, whenever possible—even if it’s only supervised visitation.

Keep in mind, domestic violence can still impact legal and physical custody decisions, even if you do not file for a fault-based divorce. Here, any history of abuse will always be considered, regardless of grounds.

Alimony (also called “spousal support,” or “spousal maintenance”) are payments that a judge orders one spouse to make to the other, after divorce.

This money is meant to help a dependent spouse get back on their feet, after divorce. It is often awarded to the homemaker half of the duo, in recognition for the many career and financial opportunities that may have been sacrificed over the years on behalf of the family.

Alimony is gender-neutral and can be awarded to either spouse. These payments—their amount, duration, and frequency—are determined by analyzing factors like:

As you can see, Tennessee courts do consider fault when deciding on alimony; meaning that domestic violence can certainly play a role in how much of this support a spouse receives.

That being said, alimony is not intended to be a punishment, but a need-based order. Hence, the weight this factor receives in your divorce will likely depend on your judge, the severity of the fault, and what kind of a role it played in your breakup. (Though, it’s probably safe to say that domestic violence has a better chance of influencing alimony than other fault grounds.)

A protective order (not to be confused with a “restraining order,” which is used in civil litigation), is a legal document that prohibits someone from harming you.

In some cases, this order is necessary to keep family members safe while a divorce is pending, though it can also be used in non-divorce/domestic abuse situations.

Protective orders can be either temporary or permanent, and, among other things, can be used to prohibit:

Obviously, this piece of paper cannot physically restrain an abuser from acting out—we won’t pretend that it can. However, what it does do, is attach immediate and serious consequences for violating any of the prohibited behavior. This enables law enforcement to act swiftly, and to carry out consequences immediately, if any abuse occurs in the future. 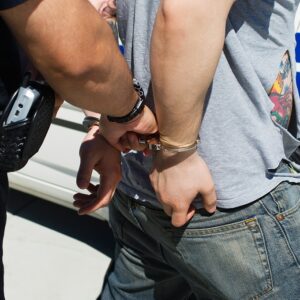 Domestic violence doesn’t just affect the outcome of divorce. It’s also a serious crime; one that Tennessee courts do not take lightly.

That’s why—in addition to your divorce, which will be filed in civil court, and heard by a family court judge—the state of Tennessee also has the option of filing criminal charges against your abuser.

Criminal charges are completely separate from civil divorce claims. These cases are heard in criminal court, by a criminal court judge, and with the state acting as the prosecutor against the abuser. (This means that they do not need your permission to file charges. Only the evidence to back it up.)

When upheld, criminal domestic assault charges can result in fines, jail time, and a criminal conviction that cannot be expunged from a person’s permanent record.

If you are experiencing domestic violence in your relationship, the most important thing is to keep yourself—and your children—safe. Contact law enforcement if necessary, and, when you are able, be sure to discuss these issues with your trusted family law attorney.

Divorce is difficult, no matter what the circumstances are. However, when domestic violence is involved, this already-tumultuous experience becomes both more heartbreaking, and more complicated.

If our brief intro to domestic violence didn’t answer all of your questions, we want to hear from you. Call the Byrd Law team at (423) 304-6827, or contact us online, and let us help you navigate these serious issues, and how they might impact your Tennessee divorce.