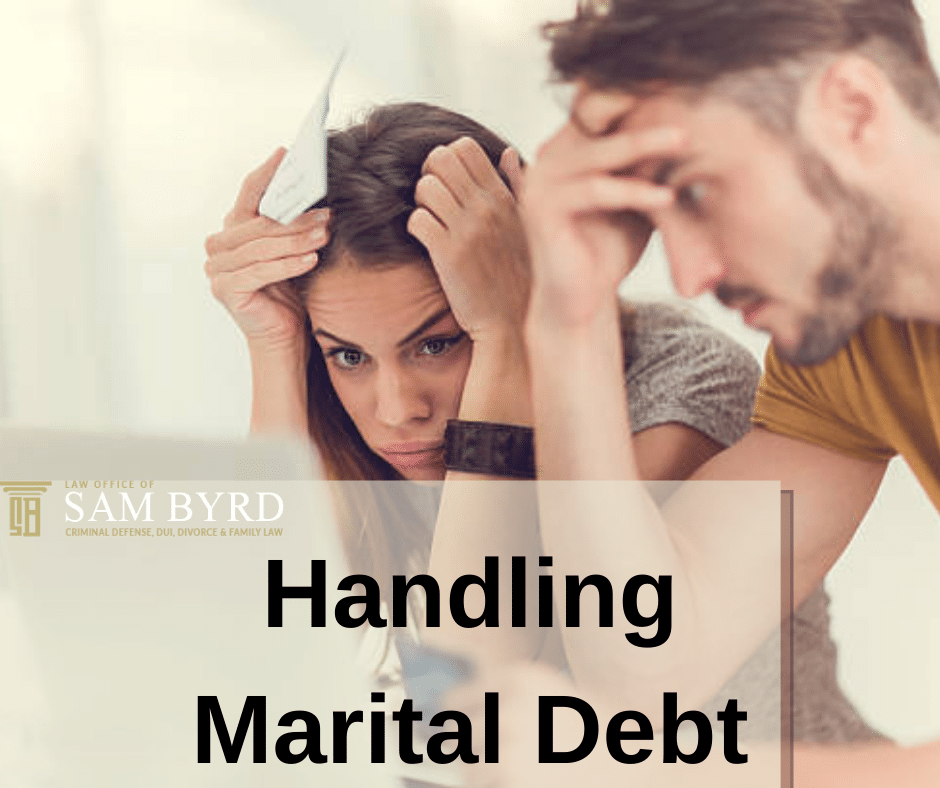 Property division isn’t just about the assets you and your spouse accumulate over the life of your marriage—it’s also about the debt you’ve taken on.

Marital debt is considered jointly held property—the same as any other real property, account, bitcoin, investment, or valuables you own. Because of that, these obligations are subject to the same rules of equitable distribution, upon divorce.

But what happens if you didn’t even know about your spouse’s debt? you might be asking. Are you still liable if your name isn’t on the account?

These are all important questions, and we have the answers.

Here’s what you need to know about handling marital debt during a Tennessee divorce, and how the Byrd Law team can help you navigate these complex, financial matters.

What is Marital Debt? 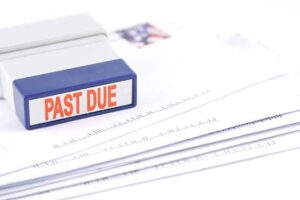 First off, marital debt is the same thing as marital property. In the eyes of the court, there’s no difference—debt is just another thing you two own, which will need to be divided, if you break up.

These divisions are done according to the rules of equitable distribution.

In an equitable distribution state, the property you acquire during marriage is considered marital property, and belongs to both of you equally—regardless of whose name is on the paycheck, deed, account, or loan. On the other hand, assets acquired before or after marriage are considered separate property, and will (theoretically) leave the marriage with that person.

Hence—without getting too bogged down in exceptions—we can roughly surmise that if the debt was accumulated during the marriage, it’s likely the joint responsibility of both spouses, and will be included in your regular property division. Anything before, or after, however, belongs to the spouse who acquired it, and will likely leave with that person, upon divorce.

How Does the Court Handle Marital Debt?

While the debt might belong to both of you, equally, the court does have some flexibility in determining how these obligations are allocated.

When handling marital debt, there are four main questions that Tennessee courts ask, to determine which of you is most appropriately suited to take on the obligation. These questions include:

One of the most important of these questions is the first: the debt’s purpose. Here, funds that were used to benefit the family are going to be viewed a lot differently than debt incurred to purchase a new condo for a mistress. When the debt benefits the family, it’s generally seen as a joint obligation, which will be divided equitably, along with other marital assets.

In the same vein, racking up $20,000 in debt for new furniture right after you separate will probably raise an eyebrow with your judge. If it’s pretty clear that debt was acquired for the benefit of one spouse, alone, then there’s a good chance that the debt will be assigned solely to that individual.

Whenever possible, the court tries to assign the debt to whoever will be benefiting from the obligation. (So, for example, if you get to keep the house, then the court will almost certainly task you with paying the mortgage.)

That being said, equitable distribution is all about setting both spouses up to have an equal chance of success, post-divorce. Hence, if one spouse is at a significant disadvantage in the job market (due to, say, a lack of education), it’s possible the court will assign more debt to the spouse who is more capable of paying it off.

Don’t forget: marital debt starts when you get married, and stops when you get divorced. It does not stop, however, just because you’ve decided to casually separate for an extended period of time.

While there’s nothing wrong with getting separated, it’s important to understand that this transition does not constitute a divorce for purposes of separate and marital property. And without making your time out official, you run the risk of being obligated for the debts your spouse incurred while separated.

To solve this problem, make it official, and get a legal separation.

A legal separation (rather than a casual one) ensures that your financial obligations end at the date of your shared living. It can free you from liability for your spouse’s spending, while apart, and give you the peace of mind in knowing that whatever decisions you eventually make, they’re done for the right reasons. 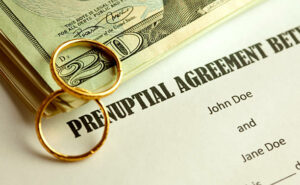 If you’re worried about your partner’s bad spending habits—and you aren’t actually married yet—one way you can financially shield yourself is through a prenuptial agreement.

A prenuptial agreement (or “prenup,” as it’s often called), is a pre-marriage contract that couples can use to keep their financial assets and obligations separate, while married.

At the end of the day, joint debt is joint debt. The court might order your spouse to pay a certain percentage of marital debt, however, creditors are not obligated to honor these terms. Which means that if debt goes unpaid, they can (and often do) come after both of you—regardless of what your order might say.

Hence, don’t hide your head in the sand, just because your divorce is finalized. Keep track of your divorce terms, follow up with your ex about obligations, and if something isn’t being paid, notify your family law attorney immediately.

While creditors might not care who pays, your judge certainly will, and the willful violation of a divorce obligation could land your ex with serious penalties, ranging from fines to jail time.

Debt isn’t something you take lightly, which is why it’s so important that your attorney doesn’t either. That’s why we hope you’ll choose us to help protect your financial rights, when handling marital debt.

If you have more questions about marital debt in Tennessee, and how these obligations might end up affecting your divorce, we want to hear from you. Call the Byrd Law team at (423) 304-6827, or contact us online, and let us help you ensure you aren’t assigned more marital debt than you deserve.